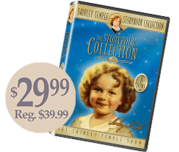 Shirley led a fascinating life, and so many of her fans want to know more about her.  Below are answers to some of the questions that Shirley was asked most.  Please let us know if there is something else you would like to learn about Shirley.

When was Shirley born?

Who were Shirley's parents?

Shirley's father, George Francis Temple, was a businessman and a banker in Southern California.  Her mother was Gertrude Amelia Krieger.  Gertrude loved dancing and this love obviously helped shape Shirley.  George and Gertrude were married in 1914 and had three children -- Jack, George, Jr. and Shirley Jane.  They all lived in Santa Monica, California.

How did Shirley get her start?

Shirley began dancing at Mrs. Meglin's Dance Studio in Los Angeles when she was 3 years old.  It was here that she was seen by two producers from Educational Films Corporation -- Jack Hayes and Charles Lamont.  The year was 1931, and they were making a series of one-reel short films called Baby Burlesks -- parodies of famous films of the day but with all-child casts.  Shirley was chosen as the star and was paid $10 a day.  You can watch these films on the two-disc DVD collection The Early Years which is available restored and in color from this site.

What was Shirley's first major film?

Shirley acted in a number of films after the Baby Burlesks, each time getting strong reviews and praise from all who saw her.  In late 1933, she was contacted by Fox Film Corporation and landed a role in their new film Stand Up and Cheer, a depression-era fantasy.  It was a great success, and Shirley's dancing and acting wowed everyone.  This marked the beginning of her meteoric rise to become the biggest star in the world, and the creation of her many wonderful films.

How many movies did Shirley make?

In all, Shirley starred in 14 short films, 43 feature films and over 25 storybook movies in a career that spanned three decades, from 1931 until 1961.

What did Shirley do after leaving show business?

Shirley was married at age 17 to a handsome soldier name Jack Agar.  They had a lovely daughter named Linda Susan.  But Agar's personal problems led them to divorce four years later.  It was then that Shirley met her true soulmate -- Charles Black, a former Naval Officer.  They were married in 1950 and had two children -- Charlie, Jr. and Lori.  Shirley went on to be a U.S. Representative to the United Nations, the U.S. Ambassador to the Republic of Ghana, the first woman to be U.S. Chief of Protocol, during Gerald Ford's administration, and the U.S. Ambassador to Czechoslovakia.  Shirley wrote the first volume of her autobiography in 1988 entitled Child Star.  Additionally, she released The Shirley Temple Storybook Collection which contains her favorite fairy tale episodes from her television series, The Shirley Temple Show, all on DVD.  It's available directly from this website.  Enjoy!